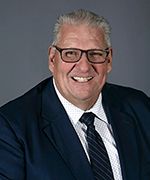 A longtime Wheeling resident, Leonard "Lenny" Walker was elected to the District 214 School Board in April of 2017. In addition to serving District 214, he also dedicates his time to NSSEO as an alternative Board Member. As PTO president at Wheeling High School, he worked to provide monetary support for student groups by re-establishing mini grants. He received the District’s Distinguished Service Award in 2017 for rebuilding the PTO and his fundraising efforts with Wheeling Choral League and PTO. Walker is the Vice President of Operations with Kennicott Brothers Company, a floral importer and distributor headquartered in Chicago. Lenny and his wife Karen are proud parents of four children who are Wheeling High School graduates.